The study overlooks the initiations, that aim at expand and differentiation of the higher education. It shows two alternatives, the elite education and the integration of “remote from school” social groups into higher education. The present review highlights the forming of special colleges (szakkollégium).

The study investigates mechanisms of distribution of student benefits in the years 1850-1918, based ont he exhaustive prosopographical data bank of graduating pupils of Hungarian secondary schools. The role of the three main factor observed – the religion, social strata and scholarlyperformance of pupils – proved to differ largely in different school types. Benefits concerned just one tenth of pupils, though with an increasing trend. In state schools no difference can be detected among denominations, contrary to church schools, where pupils of the maintaing church were always advantaged. Between Roman Catholics, Protestants and Eastern Christians marked trends of segregation can be observed and this applied to the unequal allocation of benefits too. This cannot be observed against Jews at that time, but they could count mostly on tuition wavers only, connected to scholarly excellence, but rarely on grants – especially outside Lutheran schools. Social criteria in the allocation of benefits profited to lower class students and those from families of teachers and clerics.

Attila Chikán – Márton Illyés
The ‘Rajk model’: A pedagogical experiment and its results

The quality of a country's education system, among other things, relays on the existing forms of diversity and the inclusion of innovative experiments. The College for Advanced Studies is such an innovative form, a combination of accomodations and professional programmes. The striking features of these colleges are their professionalisms, community commitments and social sensitivities. The ‘Rajk College, established 47 years ago, served as a model for several dozens of similar institutes of excellence in Hungarian higher education. It is a typical bottom-up initiative which is based on self governance of the student community and essentially operates without external (government) financial support. The programme of the ‘college’ is combined with other excellence initiatives (CEMS, international relations, student research competitions, curriculum development, etc.). The career pathes of Rajk alumni members (close to 800 today) provide a verification of the successfulness of the Rajk-model. Dissemination of this model will help our universities to become internationally competitive by educating professional and community elites.

László Galántai
Lifeways in the system. Ways to the successful matric in Wlislocki Henrik Roma College

In our paper the role of primary and secondary sozialization in successful matric is analysed. The research is based on half-structured qualitative lifeway interviews (N=25), these interviews were given by multiply disadvantaged students of University of Pécs, members of Wlislocki Henrik Student College. The sample is unrepresentative. Our results show sozilization circumstances of successful matric.

Our study focuses on the factors – with special attention to students’ social background and resilience – which play an important role in meeting students and colleges for advanced studies (CASs). People encouraging admission into a CAS (family members, students or teachers), and students’ achievement before entering a CAS are investigated in the empirical part. 427 CAS students’ answers are analysed who filled out the questionnaire of the Pathways of Talents Research (Tehetségek Útja Kutatás) in spring of 2015.

In our study of denominational special colleges as higher education system is performing effectively investigated complementary and belong to the system, specific tasks as well as talent development institutions, and relies on the concepts of education sociology interpreted the academic world of colleges for advanced studies. In the course of our work to date, that the capital institutions, especially in the professional academic preparation for life dominates, while provincial counterparts to create a strong, cohesive community is the goal. The rular institutions college students at least as well in these talent development in institutions of higher status than the capital city student peers.

In this study we present the student and teacher support systems available in the last few years at the Sapientia Hungarian University of Transylvania Csíkszereda, including the Erasmus + programs, the social-, merit, study scholarships and other research and study grants in the case of students, accentuating the research possibilities in the case of teachers. 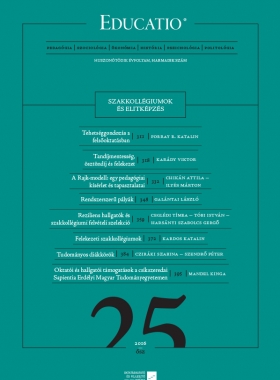