The development of vocational education is one of the most important goals of The European Union, but it is regulated differently according to country. The funding systems for VET operate in different ways, being adjusted in line with the character of each country – their society, national economy, education system and traditions. Thus it will be difficult for one to move over to another funding system, though it is possible to learn about new elements from other countries. This study indicates how vocational education is financed in E.U. countries and – via examples taken from some of them – sees what roles the several actors (governments, local authorities, firms) can play in the funding of vocational education.

István Polónyi
Priority improving, deteriorating conditions, or the financing of the national training

The new education policy, from 2011 onwards, is predominant; and public education and school-based vocational training are now the responsibility of the state. Former local government-run schools were transferred to the central state. The central educational administration has, at the same time, introduced a change in financing; input financing will be replaced by formula funding. State support for education has gone down significantly, the percentage of reduction has been most notable in relation to vocational schools – 46%.  The international outlook also shows that since 2009 Hungary has been increasingly lagging behind the international average for the provision of professional training support. The majority of developed countries have responded to the economic crisis by increasing spending on education – though this country has reduced the support given to it.

The study describes the changes in the initial VET-school system after the political turnaround of 1989-1990. The story fits in a 3-phase picture. The first phase lasted more than a decade following the economic collapse and can be characterized by a restructuring of maintenance and programme provision. By the early 2000s the system had found an equilibrium. The second phase, from 2005, saw the building up of the system of Regional Integrated VET Centres – while the third one oversaw a liquidating of these and the establishing of a system of the so-called (quite new) VET Centres. The story of this third phase has just started, however. Although the institutional framework meets the requirements of an effective and high-quality VET system, some other policy innovations might present themselves as obstacles here.

Career guidance is still mainly interconnected with schooling within the VET system; and an out-of-date Fordism model is still the key driver in the Hungarian VET policy. This study looks at the role of career education and the meaning of career adaptability, career management skills in the context of a post-Fordism model and discusses implications for the Hungarian school and VET systems.

The school-to-work transition has a wide research background. Begun in 2010, our study has aimed to explore the transition of persons from school to the world of work. International and Hungarian studies show that there is no longer only one aspect of such a transition, as a learning path and career are often intertwined and build on one another; so the transition has become more precarious. This is what our longitudinal study seeks to confirm. Besides learning path and career path changes, we wished to explore the opportunities that young people with different qualifications have to face up to when starting on one path or another. Our study is new in that in examines the careers of skilled workers graduating not only from vocational training schools but also from vocational secondary schools. This enables us to compare skilled workers with or without a secondary school leaving certificate.

This article is a shortened version of the closing study of research done and supported by the Together for the Jobs of the Future Foundation (Közösen a Jövő Munkahelyeiért Alapítvány); it focuses on typically manual occupations. It shows the main characteristics of horizontal congruence via tables presenting 10 major occupation-related groups and the major groups of manual/physical workers (major groups 6, 5-9). The results of the congruence survey show that – with the exception of a few occupations – the given task can be done with non-congruent qualifications to a lesser or higher degree. It can be concluded that no general statements can be made about congruence, and that it is more an analysis of data on the level of given occupations, occupational groups and sub-major groups that makes the most sense. 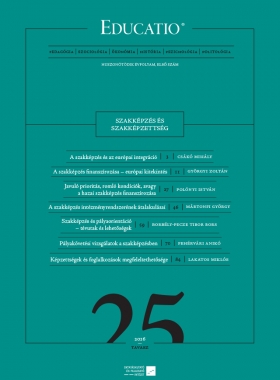