70 Years of the Hungarian Primary School

This paper seeks to illustrate the political and cultural background of education policy in the post-1945 time period. First, different theories about and evaluations of these
distinctive few years are looked at as seen and assessed by various historians and politicians. The paper explores the educational policies of the distinct political regimes via a process of going backwards in time, i.e. commencing in 2010 and ending in 1945.

When summarizing the characteristics of such temporary policy-making in the examined time period, the study focuses on the role of a specific multi-party system and that of non-party organizations. Cultural life was relatively free and diverse in the period of restricted democracy. Introducing the culture of a then-existing institutional system can enable us to get a better understanding of contemporary education policy.

The primary school was considered to be democratic in terms of social equality, though with suppressed freedom.

It was not widely discussed that every Communist party in countries in the Soviet sphere in Europe had kept to the same policy in their coming to power. All of them made efforts to set up unified, primary school-based education systems to attract disregarded teachers working in basic education; and they also promised to raise the social standing of under-educated people.

It was forgotten that teachers from the pre-war period – persons who carried a mixed baggage of racist, nationalistic attitudes and social sensitivities – went on to play a key role in school reform, in coalition with people coming with the Red Army; though from this 1948-1950 period, all such groups have been marginalized in public life and eliminated from social memory and, ultimately, from history.

Elemér Kelemen
The turning point in the history of the Hungarian education system: The 70 year-old primary school

The primary school as an institution was created in controversial circumstances. A socio-political and professional consensus was lacking and the political legitimacy of the primary school was under dispute. Furthermore, poor conditions of day-to-day functioning had a major impact on the future of this type of school.

The initially-conceived humanistic and democratic function of the primary school was gradually replaced with Communist ideological and political goals in 1948. This caused a serious dysfunction, which was exacerbated by rapidly changing political requirements and an intensification of the selection process. Yet the symptoms of the crisis in 1980 went beyond the school system’s internal problems – and the new democratic system that was established in 1990 has failed provide proper responses to the challenges posed by the old system.

National education standards were not lagging behind 75 years ago when the elementary school system was created. Given the level of economic development, the state socialist system inherited a relatively high level of educational attainment and an advanced school system. Thus, the state leadership has spent very little on improving the school infrastructure, though it has extended the obligations of schools. Domestic, basic education in the early ‘80s was therefore characterized by a polarization that was like that at the end of the ‘30s. The differences between rural, urban and metropolitan education was maintained. Conditions did improve slightly, but the quality of education, despite policy system changes, has not altered. After 1989, the upkeep of schools become decentralized while educational management was liberalized. For this reason, a polarization of the school system and an uneven quality has been conserved to the present day. Polarisation is producing low educational attainment along with employment-related problems; and there are high unemployment and issues with the social cohesion of underprivileged strata of persons. The truth is not that the primary school has gone beyond its time but that time was always moving beyond primary education.

Melinda Kovai – Eszter Neuman
Where has socially just public education gone? The fate of comprehensive education reform in England and Hungary from 1945 to the 1980s

This paper aims to explore the social, economic and political-ideological context of the rise and fall of comprehensive education policies on both sides of post-war Europe. Our interest lies in seeking the reasons behind this phenomenon from the 1980s onwards; for scientific, policy and other critical discourses focusing on class-based selection mechanisms within education have been greatly diminished. We hope that identifying the major divergences and convergences between the history of comprehensive education policies in Hungary and the UK will provide us with a perspective that locates Hungarian State Socialism within a global context and allow us to study the sources and the development of ideologies that were influential as regards class-centred education policies.

This study aims to analyse work education as a characteristic symptom of socialist pedagogy, especially via the introduction of a new subject: “Practical activities”. The
so-called school-reform was initiated by the Soviet Union; Khrushchev came up with the official slogan for the change: “A closer tie between education and life”. Preparation for practical life was an important claim made for this, while other reasons for education-based work came from the labour market and ideological voluntarism. The political discourse formed by the leaders of the Party was “translated” by the education sciences into the language of pedagogy. The first half of the study reviews the decision-making mechanisms and some data relating to implementation; the second part points to the clash between intentions and arising problems – though further study will be needed to analyse the whole of the process. 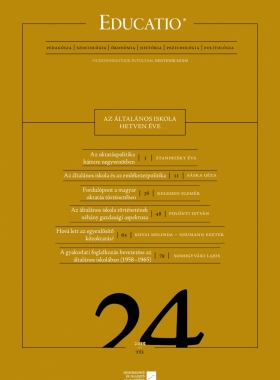